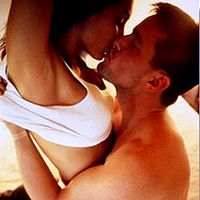 Make-up Sex produces an emotional high that is highly intoxicating. There’s nothing like steamy sex to quench the flames of a heated argument.

But according to one doctor, jumping into the sack to smooth things over is the same as taking cocaine.

Clinical psychologist Seth Meyers believes that the high experienced from make-up sex is the real reason couples run for the covers to stop a fight and doesn’t go very far in solving the problem.

In a recent blog post on Psychology Today entitled, Make-Up Sex Hurts: Why and How to Avoid it, the L.A.based doctor explained why he think it is ‘bad news.’

‘It reinforces fighting and emotional drama. Think about it: If you have amazing sex after you have a huge fight, doesn’t it make sense to fight again when the reward is so great?’ He asked his readers.

The controversial theory contradicts what most people consider as a healthy way to end bad feelings and reconnect with a partner, but Dr. Meyers says that in most cases the search for intimacy is used as a band-aid for a larger issue.

When couples have shared ‘extreme negative emotions’, he explained, make-up sex provides a quick and easy resolution that might otherwise not have existed.

‘They hunger to switch gears and jump to the opposite end of the spectrum- to feel the high that comes with making up,’ he wrote. ‘Honestly, it’s not that different from an addict who needs a hit of cocaine.’

But while initiating an argument solely for the satisfaction of the ensuing make-up sex is clearly indicative of a larger problem, compensating for a nasty spat by getting physical can also spice up your sex life, according to Dr. Jennifer Berman.

The Californian ‘sexpert’ told one curious reader in an issue of Health magazine: ‘Makeup sex is normal – and generally healthy, too.

‘Not only can it be madly passionate, but it can also sustain intimacy during tough times. Besides, it’s natural to feel turned on after an argument.’

Dr. Meyers argues real intimacy comes with balance and understanding and men and women would do better to pause for thought the next time they are compelled to rip each others’ clothes off mid-debate.

He advised: ‘Should you find yourself in the middle of a sexual encounter and suddenly realize that you feel confused, angry or sad, gently pull back and explain to your partner that you want to stop and try again later.  Checking in with yourself and communicating honestly and directly is the best way to keep the problem from snowballing.’

The Real Cougar Woman is a 5-carat diamond who knows the importance of taking care of her health, beauty, relationships, finances and spirituality. Linda Franklin says,”there is no stopping a woman who has a strong belief system, passion and a dream.  All things are possible”.  Linda’s book, Don’t Ever Call Me Ma’am helps women of all ages tap into their power and live life to the fullest.